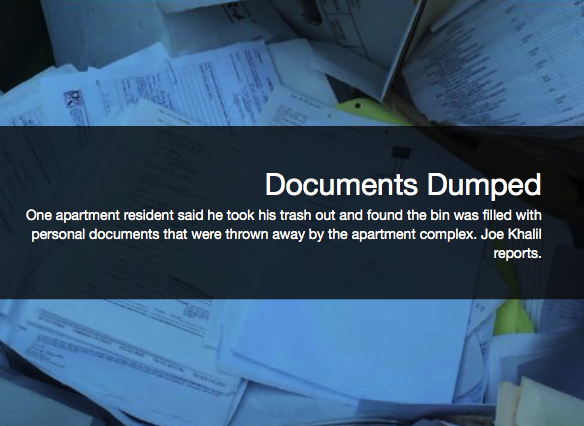 SACRAMENTO — Fernando Rodriguez is one of those people who, when he throws his garbage away, pushes the whole pile to the bottom. Saturday, as he routinely took his trash to the bin at the College Garden  apartment complex where he lives, what he saw the top of the pile made him take a second look.

“I noticed there was boxes of files or paper. It was essentially all the credit reports that had been run by previous residents,” Rodriguez said.

Hundreds of files, with people’s names, addresses, even Social Security Numbers — out in the open for anyone to see.

“I thought it was just a few, and then as I scavenged through the bin I realized half the bin, if not the whole bin, was full of boxes,” Rodriguez said.

Rodriguez took pictures on his cell phone of the hundreds of documents, and a few minutes later recorded a video of a man rummaging through the dumpster, with people’s private data right at the man’s fingertips.

“What are they going to do when they find out they were the cause of identity theft from other people,” asked Rodriguez.

We tried to find out. The sign at the College Garden leasing office directed questions to another office. The apartment managers weren’t in when FOX40 arrived. They did show up later, and said they had no comment.

“There’s nothing that says you have to shred documents and if you don’t something will happen to you,” said attorney Alin Cintean. He says technically no laws were broken. A resident could file a civil suit, but they’d have to prove their identity was stolen because someone got their information from the dumpster, not someplace else.”

“If somebody’s identity was breached it’s difficult to prove that that’s how it happened from the apartment complex,” said Cintean.

Rodriguez said he isn’t looking to sue or even an apology. He only wants a guarantee that whoever’s responsible for his and his neighbors’ private information isn’t so careless next time.